As part of the International Day against Racism, we are calling all anti-racist groups and individuals in Groningen to come together and make noise in the city centre. We cannot leave the terrain of the streets to conspiracy theorists, racists, and the far-right.

-Against interpersonal, institutional, and systemic racism.
-Against police violence, anti-Blackness and discrimination of Asians.
-Against Islamophobia and attacks against progressive activists.
-Against deportations and the militarisation of the European borders.
-Against fascism and the far-right. Not in our parliaments, not at our universities, not in our streets.

In the last year, the far-right has gained more foothold. The neo-fascist Forum voor Democratie and the racist, ultraconservative PVV of Geert Wilders are becoming increasingly radicalised.

In the last year, progressive activists like Kauthar Bouchallikht have become the target of islamophobic right-wing smear campaigns. Racist street violence of hooligans has become more threatening and has been directed against KOZP protests and meetings.

The neoliberal corona-management is hitting communities of colour and working-class people with poor living conditions hardest. Yet this reality is not widely discussed, and instead, the failures of the crisis-management of leading parties are being picked up and politicised successfully by the far right.

The corona outbreak is also linked to numerous attacks on people with East-Asian appearance. Last year, about 3000 racist attacks against Asian Americans were reported as opposed to 500 between 2017 and 2019. While many think that this is merely a problem of the U.S., according to NOS, racism against Asians in the Netherlands also increased as a result of the corona outbreak.

The Toeslagenaffaire is just another proof of the realities of structural racism in the Dutch state and politics. Established Dutch parties are failing at taking the struggle against racism seriously. Many continue to support fundamentally racist political realities, such as the militarization of the European borders, while refusing to take action against the appalling lived realities of the many thousands of people stranded in endless camps like Moria. The European external borders continue to be the deadliest borders worldwide. Anti-racism means fighting the institutions that continue to enable this to happen.

In response to these developments we say:
-Anti-racist unity: Let’s build anti-racist and anti-fascist networks both on local, national, and international levels. We have to act fast and united against racism and the far-right.
-Solidarity: An attack against one, is an attack against all. We recognise that our liberations are connected and that we stand in solidarity with each other.
-Shut-down fortress Europe: Evacuate Moria and all camps at the European borders.
-Fight the system: A successful anti-racist movement must fight the power structures of international capitalism and the racist political system. Let’s put out the fires that continue to fuel the divisions in society and continue the exploitation of marginalised people.

If the last year was a year of crisis, let’s make the coming years a period of organised resistance.
This protest is organised by IDEA, GFN, KOZP Groningen, Internationale Socialisten Groningen, BIJ1 Grongingen, Decolonize Groningen, and other anti-racist activists. 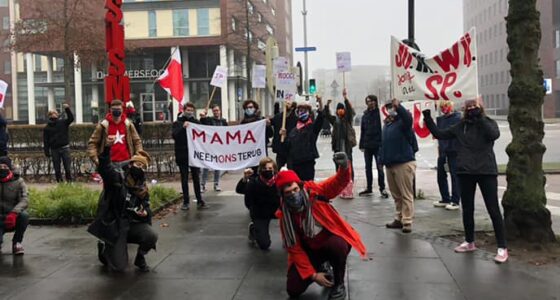